17th September 2019
Aston Martin marked the most successful campaign in its domestic racing history, winning six of the eight available titles in the 2019 British GT Championship, following the series finale at Donington Park.

Three partner teams, TF Sport, Beechdean AMR and Optimum Motorsport all secured titles in either the GT3 or GT4 classes in a dominant season debut for the new Aston Martin Vantage. 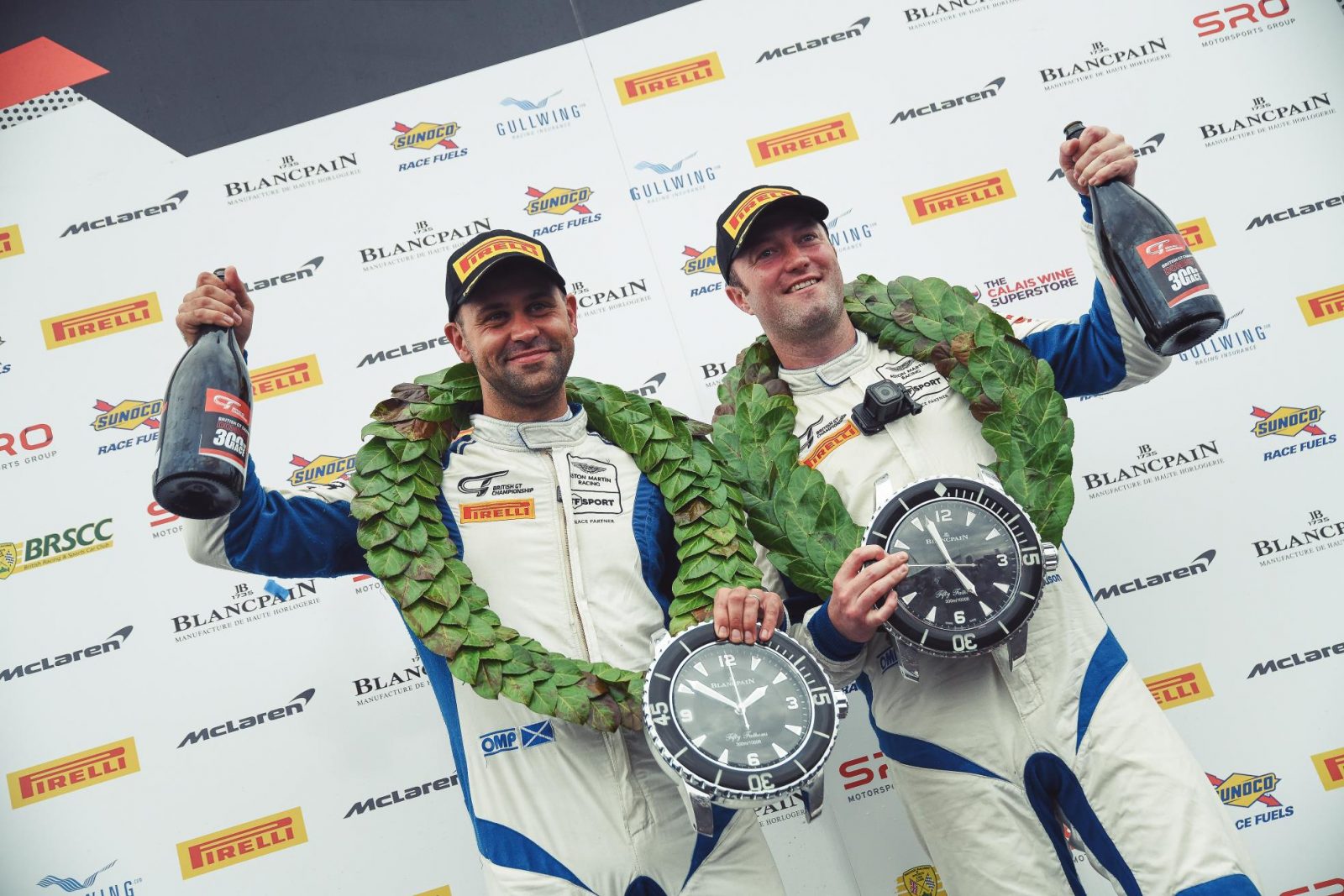 Works driver Jonny Adam retained his British GT drivers’ title for a record fourth time in a dramatic season finale. The most successful driver in the championship’s history, Adam and TF Sport team-mate Graham Davidson survived a late-race skirmish with a rival to be classified fifth in the race, which was enough to secure the title in a season that included two victories.

Coming in to the final round with a six-point deficit to the series leaders and a 20s success pitstop penalty for winning the previous round at Brands Hatch, the odds were stacked against the Scottish duo. But following a brave stint from Davidson, Adam was on course to take the title in fourth position as his rivals faltered. Adam was then hit by a rival car on the penultimate lap dropping him to sixth position and second in the championship, until a subsequent post-race stewards enquiry reversed the positions and gave them the points needed to secure the title.

TF Sport also provided the leading lights in GT4 where Aston Martin swept the board. AMR Academy drivers Tom Canning and Ash Hand secured the overall class championship as well as the Silver Cup with third place in class, following an exemplary drive by both.

All in all, and including the GT3 Silver Cup title that Optimum Motorsport won at Brands Hatch, Aston Martin secured two titles with the Vantage GT3 and four with GT4, representing the most successful haul by any manufacturer with a car on its season debut.

Adam said: “What a season it’s been, to be 54 points off the lead of a championship and then come back and win is mega for everyone at TF Sport and Aston Martin Racing. To wrap up some championships and showcase how good the new car is on its debut season is an immense achievement. British GT is an important customer-base and to win four championships is really important to me personally. It’s a lovely feeling. To see so many new Aston Martins on the grid this year at the first round was really nice, so to come here at the final round and for Aston to dominate in the points in all classes shows how good a car we’ve built. Graham has driven so well this year, and he has really wanted to win this championship. To have the nerve to drive the way he did today and give us a shot was amazing.”

Davidson added: “After Silverstone I thought it was all lost but I did what I could do and somehow we have got to this result at the end of the year. But it just goes to prove that persistence, practice, training and simulator work makes a difference. Jonny knows how to win a championship and he knows how to work with his co-driver. Even yesterday it seemed a distant chance, but I went out there and just got the best out of the car and didn’t take any chances. It’s nice to win it with Aston Martin and TF Sport. Jonny is the best driver coach in the world.”

Alcon Group Sales Director Jonathan Edwards commented: “We are massively proud to be part of such a successful, dominant domestic GT series season with Aston Martin Racing. On a personal note, seeing Graham take GT3 is hugely satisfying, a tremendous achievement indeed. My congratulations go out to Graham, Jonny, all the other drivers and team members at TF Sport, Beechdean AMR, Optimum Motorsport and of course Prodrive.”

Aston Martin Racing President David King added: “What a fabulous result for the new Aston Martin Vantage. It’s unprecedented to see a new car dominate such a competitive championship as the British GT series. That three teams were able to secure championship titles and deliver on the promise of the Vantage is testament to the tremendous hard work and engineering talent of everyone at Aston Martin Racing and of course our partner. And I would like to take this opportunity to thank those teams for making such a big commitment to a new car in its first season. I am so pleased we could repay their faith in us. When we envisaged the new Vantage racing car, it was always with a view to creating a user friendly platform that was fast in the hands of professional drivers and customers alike. That we have been so successful in British GTs and competitive in so many other places around the world, proves that we have achieved our objectives.”

You can find out more about which cookies we are using or switch them off in settings.

This website uses cookies so that we can provide you with the best user experience possible. Cookie information is stored in your browser and performs functions such as recognising you when you return to our website and helping our team to understand which sections of the website you find most interesting and useful.

This website uses Google Analytics to collect anonymous information such as the number of visitors to the site, and the most popular pages. Keeping this cookie enabled helps us to improve our website.

Please enable Strictly Necessary Cookies first so that we can save your preferences!